How To Really Stop Phishing


If phishing sites want data, they'll get it!

Running a honeypot, you soon realise there are four types of spam. The first is basically just adverts. Next comes social engineering spam, which is mostly advanced fee fraud. There's a ton of cash or a pretty girl waiting if you send a small processing fee. By far the largest category is ransomware, but this is closely followed by that perennial favourite, phishing spam.

Phishing works. Its "product" nets huge profits in two ways. First, by direct use of the stolen data. Second, from sales of that data to other criminals. This got me thinking about how to fight back.

Phishing sites tend to be static replicas of the real thing, with a set of input boxes and a submit button. That is their major weakness. Another is that, though the inputs might be scrubbed to remove the possibility of a sneaky SQL injection, the information being entered might not be checked. Who's to say that the date of birth, password, bank details etc. that you enter are real? What if you were to enter a thousand different sets of bogus information? How about a million, or even ten million? 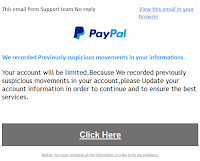 What I propose is that when a phishing site is discovered, it would be fun to deploy a script to flood it with random data of the appropriate format for each input field. Finding real data in the collected noise would become nearly impossible, and so would help protect the innocent. If such poor-quality data is sold on to third parties, then Mr Big will soon want his money back and probably a lot more besides.

Diluting phished data to homeopathic strengths is one thing, but the general idea could be applied in other ways. One of the main tasks in running a spam honeypot is "seeding". This involves generating email addresses to accidentally-on-purpose leave in plain sight for later harvesting by spammers. If someone were to set up a honeypot with a huge number of domains pointing to it, and with a huge number of active login accounts, those accounts can be leaked or even sold (with all profits going to charity, naturally!) as being demonstrably live and real. If the buyer tests any of them, they'll work. Set up the honeypot in enough interesting detail, and Mr Big won't be able to tell he's been duped for quite some time.

Phishing is popular because it's easy, relatively safe for the perpetrator, and highly profitable. Frustrating the efforts of criminals, casting doubt on the phished data being sold, and hopefully causing wars between cybergangs is certainly one potentially very entertaining way of fighting back.

Of course, flooding phishing sites with bogus data may already be quietly happening. I certainly hope so…